In Captain January (1936) is the word Former.  I am not at Scandinavian Immigrant Experience Archives right now, in changing the Volunteer Job listing at Facebook, I put in Former Volunteer, now I see there is a lot of Baggage to the word Former.  I believe at some point I will do more of the volunteer work.  Now I have deleted the reference.

Can my listing as a Former Volunteer (now deleted) at Facebook refer subconsciously to the similarity of volunteer work that referenced my own context?
Posted by Laura Jensen at 3:45 PM No comments: 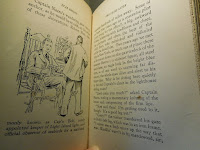 Iwant to include an illustration by Frank T. Merrill, who contributed much to what appearance should be like – he illustrated a version of the Louisa May Alcott books.

Returned an Interlibrary Loan Book - a sequel to Captain January, by Laura E. Richards, the novel two movies were based on, one that starred Shirley Temple.  (Whose face is on a stamp now, Shirley Temple.)  The story advanced to a young lady raised in the affluent New York home of her aunt, in a time of romantic associations. Her language often returns to the three books of her early reader years, the Bible, The Dictionary, and Shakespeare.   At the end of the story she is returned to her seaside home and she sings "Where the Bee Sucks, There Suck I"(from The Tempest):
Where the bee sucks, there suck I:   /  In a cowslip’s bell I lie;
There I couch when owls do cry.   /  On the bat’s back I do fly
After summer merrily.    /  Merrily, merrily shall I live now
Under the blossom that hangs on the bough.
Posted by Laura Jensen at 2:06 PM No comments:

Before all the cell phones on the bus, I carried three by five notecards with a thick rubber band.  Right now I have used cards I made during the inventory of books from my parents' house in the late 1980s, the list included children's books that were mine. The Jack and Jill Round the Year Book, I entered onto the internet, and found the illustrator also did the Gone-Away Lake books by Elizabeth Enright, the Borrowers, and Miracles on Maple Hill.

Junior High School resources of my own brought books into the house.  Downtown was Rhodes' book department on the other side of the escalator wall.  I still have A Tale of Two Cities, and others with a similar cloth hardback format. Downtown also was the Tacoma Art Museum, at an historic building near the Fawcett monument, where I visited once or twice, and i visited Fox Books.  I still have Memoires D'un Lapin Blanc, in its gold and red old-fashioned hardback.  We took French, the language of visual art.
I got books in the mail from a book club.  I think I ordered The Jack and Jill Round the Year Book from the club.   Miracles on Maple Hill, is a book with its history with me, that I believed it sounded boring.  Miracles on Maple Hill would have beamed out associations I would find painful and a grave misunderstanding of what went on for me while the teachers of our class called Developmental Reading kept pushing it hard.   Developmental Reading included a gadget for each student.  It was somehow  easy to turn the pages, even though a metal bar descended slowly or quickly, calibrated to measure, direct, and increase our reading per second.  None of us  could ever have thought of books that way before.
So it was only very recently that I read through Miracles on Maple Hill  - quickly – the gadget alive in my recollection.  The author remade the gentle model that the family moves out to the country; the children and mom, who drives, commute, father recuperates, a returned Missing in Action prisoner from the war in Korea.  So in its realism, it also develops maple sugaring in Pennsylvania by an elderly neighbor who sometimes forgets.  It certainly deserved the Newbery Award.
What made me avoid Miracles on Maple Hill?  Maybe subconsciously I knew maples were really all wrong.  I knew a hill of my own, alders and some evergreens, with lots of ferns and horsetails. (Now that woods is gone.)
At that age, two years since the school had wanted me to skip fifth grade and had to bring a sixth grade desk in to the fifth grade schoolroom because I was too fat to fit the smaller desks, visits to my grandmother every Wednesday and every Sunday afternoon had never varied.  The house had entered its elderly affliction gradually.  The house was not a house, but a home fitted up in inexpensive ways for the elderly.   A lot of the time my mother had to choose.
One Christmas my mother gave me The Shirley Temple series, the entire set of the classic stories that were adapted for the Shirley Temple movies. I was a little old for these and accepted them with a slight stoicism, for I had never been a child star like beautiful Shirley Temple.  Some visits, when the weather was bad or it was dark, a Shirley Temple movie had appeared on my grandmother's tv set. We watched our way through the many commercials, but had never seen these as they had appeared on the big screen.  My mother gave these not exactly to me, she had an opportunity to buy them, and it was not possible for her not to want them.  Even as my acceptance was stoic, it was not possible for me not to associate the gift with the many visits to my grandma.
Having all the books at once was not like our family.  But I was too old for the books to be given to me year by year.
(The source of the illustration that shows a reading accelerator is listed as The Blackwell History of Education Museum at Northern Illinois University.)
Posted by Laura Jensen at 1:52 PM No comments: