A blog that featured the Promenade Poems - Fading Ad - shows that some of the poems have been worn slightly by wave action. The poems were etched into the sidewalk in 1996. The published text of the etched-in poems at the Metro Parks Art in the Parks site is from the centennial park celebration, but the poems were etched during the construction of the promenade several years before.
Posted by Laura Jensen at 12:00 PM 1 comment:

Recommended by A Participant in Tacoma Reads Together

Michael Sean Sullivan (from Facebook) There are a small group of friend working on preserving Murray and Rosa Morgan's house in southern King County. Murray wrote the majority of his books there including Puget's Sound and Skid Road and even broadcast his radio program from his study in the 60's and 70's.

Murray's daughter Lane has been keeping up the literary tradition with her blog on NW local food. Her blog seems to come from Bellingham. Very nice stop at : northwest food blog. - Old Northwest Foodie Thinks It Through.

Michael Sullivan will inform about the Tacoma of Dashiel Hammett on the First Tuesday in May at the Main Library. Hammett spent a year in Tacoma around 1920 and refers to Tacoma in The Maltese Falcon. Tacoma celebrates the 80th anniversary of the publication of The Maltese Falcon by making it the 2010 Tacoma Reads Together Selection.
Posted by Laura Jensen at 4:54 PM No comments:

Lilacs along the way.
Posted by Laura Jensen at 4:49 PM No comments:

Second Saturday of the Proctor Market 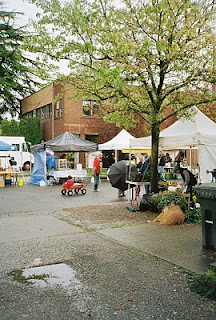 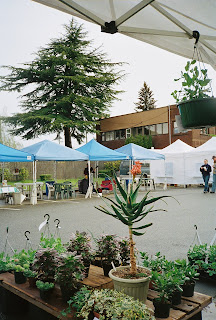 Photos at the Second Saturday of the Proctor Market. There was music, a singer with an instrument, and many flowers.
Posted by Laura Jensen at 1:02 PM 3 comments: