Mardi Gras: for Lent some people might do less screen time and I would like to recommend a book.  Sara Paretsky, whose work was honored with the 2015 Paul Engel prize from Iowa, plans another publication this year.  I have been re-reading Breakdown (2012), in which Sara Paretsky discusses alternative truths in news, and in social behavior,  in the context of change to digital format in her Chicago's newspaper, the Star.


Murray Ryerson, a supportive character in the V.I. Warshawski series, is an investigative reporter.  Digital change has reduced his prestige and his control over his content.  Alternative truth floods the airwaves from a source that was reliable print reporting and editorial content.  I wish to share a paragraph:


I found a meter around the corner from the Star's building on Kinzie and Canal.  One of Global's economizing measures had been to close down the Star's beaux arts building in the Loop and to move the reporting and editorial staff out to the press building along the Chicago River.  Given the four-hundred-million-dollar price tag for Global's corporate headquarters on Wacker, I suppose every penny saved on investigative journalism was essential; through my haze of anger I felt a brief twinge of sympathy for Murray, moved into this dingy building in the shadow of the rail yards and expressways.


The central character's series of interviews that begins with Murray Ryerson in his cubical (and does continue to Global's high rise new office) contrasts with an earlier scene at the apartment of the title (Breakdown) character.  In the disarray from Leydon Ashford's Bipolar illness, V.I. clears plates of food from rooms, clears perishables from the refrigerator, does the dishes, while she searches for clues.  Leydon was a college classmate who during a Bipolar relaspse fell from a balcony in a chapel.


Breakdown begins with an alternative truth:  V.I. Warshawski's search for thirteen-year-olds who are out after curfew progresses to their shared discovery of a dead body.  Before V.I. will connect with the police, she starts the group of girls away from the scene so that the police will not interview them until their parents are present.
I am sure we share her belief that a separate truth in this way is appropriate, it is appropriate to show children a different emphasis because only years of time can allow them perspective on topics adults have to manage.
Posted by Laura Jensen at 1:49 PM No comments: 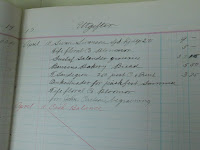 From reference about Gustaf Salander at the PLU Archives:  purchase of Groceries for the Valhalla, 1917 - a hundred years ago. 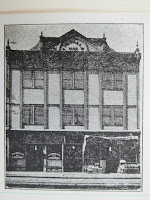 Addition To The Book Collection 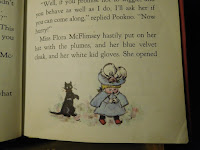 In Miss Flora McFlimsy's Hallowe'en, Pookoo has an appointment with a witch, but Flora McFlimsy feels Pookoo should stay at home in the safe, warm doll house.  He will not, but does allow Flora McFlimsy to go along with him: "Well, if you promise not to wiggle, and you behave as well as I do, I'll ask her if you can come along,"  And so, an adventure follows.  I am by my history among the people of Flora McFlimsy, now I own not only the Christmas adventure of Flora McFlimsy, when a new little girl discovers her, courtesy of a visit from Santa Claus, but the discarded Tacoma Public Library volume from the series.  (I can still collect a book now and then:  but I used to collect books.) 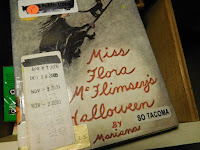 Posted by Laura Jensen at 8:01 AM No comments:

Because the Valhalla Hall has been torn down, the present view from the front door of Allen A.M.E. Church now is the empty Valhalla site.


In an earlier blog entry I describe the Columbus Day 1962 Storm at the Valhalla Hall,  I watched glass shatter in a window in a brick building across the street and stream down, a veil of glitter In another blog entry I referred to  the news article that described the move of Allen A.M.E. Church to K Street.  In 1995 the Swedish Order of Valhalla sold the hall to a Seattle Business.
January 2008 Tom Stenger, who has attended First Lutheran Church, invited me to visit the project of  Allen A.M.E.  at the Valhalla Hall.  They were removing the hall interior, this included removal of original horse hair insulation from the walls, I saw the horse hair in loops inside the walls.
Other interested history people also visited the project, because in the workers had uncovered old murals that were included in older lodge descriptions.
At that time I attended a presentation, one of many Allen A.M.E. put forward as they tried to complete funding for a hall restoration.  They fell short of attaining the necessary funding.  Their plans were shown on the internet and included a performance space like the hall dance hall with it third floor gallery above.  About three years ago I spoke to Reverend Barrett of the church who explained that it was true, while they leased to remodel the building they sought and found funding.  But their search for the project funding fell short of the money necessary.﻿
I wanted to include one photo of the murals that I took that January day in 2008.  And I want to include a photo of the Allen A.M.E.Church from the third floor of the Valhalla Hall.  Their church building once featured a large cross, which was removed when other large street signs were taken down from above sidewalks.

Posted by Laura Jensen at 11:43 AM No comments:

At the Valhalla site Sunday afternoon I could see they had found an artifact:  where the debris had been cleared away was a sign for the Gustaf Salander Grocery.  Kerry Jenkins, a city staff manager, spoke to me on the phone on Friday.  The sign is “painted lettering on exterior siding”, the wall is twelve feet long and on 2 x 8 studs, now in storage.  Bellwether Housing is the development consultant for the Raffin Construction project.  The city staff continues partnering or involvement.


According to Stephen J. Forslund  (Swedes In Tacoma and The Puget Sound Country) “Gustaf Selander (Salander) had arrived in Tacoma before the turn of the century from Östersund, Sweden, and went to work at the Griffin Wheel Co. foundry in South Tacoma.  In Sweden he had had considerable experience in the mercantile line, so he gave up his job as moulder and entered the grocery business in one of the street level stores in Valhalla Temple.  He continued his business there until his demise some thirty years later.”  The home of Signe and Gustaf Salander was nearby the hall.
Early project plans promised the housing units would replicate the Valhalla Hall in ways.  Now that is not certain.

Posted by Laura Jensen at 10:58 AM No comments:

Years ago, during the Swedish Sesquicentennial in the United States in 1996, the Valhalla held an event at the Hall, in celebration.  It had special permission for the one-time event.  I took this snapshot inside the dance hall.  The celebrant was Pastor Lyndon Murk,  among others who represented the Order of Runeberg's Choir.
Posted by Laura Jensen at 4:23 PM No comments: