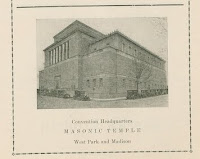 In the large picture of the choir is an equestrian statue of Teddy Roosevelt as a Rough Rider. I include a photo of the statue from the internet.

Posted by Laura Jensen at 11:42 AM No comments:

A REPORT FOR THE ADULT SUMMER READING CLUB

I read A SINGULAR WOMAN because in DECONSTRUCTING OBAMA: The Life, Loves, and Letters of America's First Postmodern President, by Jack Cashill, I read that President Obama lived for months in Seattle as a newborn. The Janny Scott book includes thorough research - letters, travel and interviews and records for the biography of Stanley Ann Obama Soetoro. Jack Cashill posits other possibilities than present explanations for gaps in the record, and these ideas contribute to my reading of A SINGULAR WOMAN. Janny Scott uses only meticulous reference work when she makes the reader aware of the death of Ann to uterine and ovarian cancer, she does not venture any theories about causes of the illness.
Cashill ventures ideas about alleged nude photos of Ann and about gaps in the record of Obama's birth. Perhaps it is sexism that prevents Cashill from venturing theories about the causes of the illness. Because the illness and death of his mother became part of the discussion about health reform for Barack Obama, a detailed study about this topic should have been part of the book, DECONSTRUCTING OBAMA.
There was swelling and a discussion about the illness might have brought up the idea of whether this was about overweight or illness. Or whether this was a tangible sign of an illness caused by use of birth control pills? (Such a discussion topic follows from the Cashill style.)
Posted by Laura Jensen at 11:48 AM No comments:

Strawberries are on sale at the downtown market today. I walked up the hill and am on my way to Listen Live at Lunch at First Lutheran Church. These are one or two snapshots of the market day hill climb from an earlier year.
Posted by Laura Jensen at 11:43 AM No comments:

Some sun after rather cold weather - really like summer.
Posted by Laura Jensen at 2:29 PM No comments:

Hamburg Inn One and Two were Two Diners

For anyone who remembers Iowa City, Hamburg Inn One and Two were two Diners rather nearby one another - I have found nice photos of diners at a site called ronsaari.com. At "stock" you can enter and click at "Diners" - great photos.
Posted by Laura Jensen at 12:39 PM No comments: