The Copy of Little Women That Belonged to My Mother 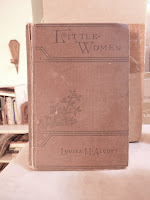 The copy of Little Women that belonged to my mother will be one hundred next year.  The book along with the other Alcott books, Little Men, An Old Fashioned Girl, Eight Cousins, Jack and Jill, Jo's Boys, were the Alcott books I read.  It was nice to see the movie on Christmas Day. 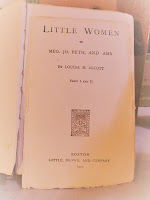 That Louisa May Alcott as Jo March was married to the professor as a believable ending to her story is presented in the movie with emotional intelligence.  I photographed the copy of the book to show and the poem in the prelude encourages me to go ahead and share these photos at the holiday time.

“Go then, my little Book, and show to all
That entertain, and bid thee welcome shall,
What thou dost keep close shut up in thy breast;
And wish what thou dost show them may be blest
To them for good, may make them choose to be
Pilgrims better, by far, than thee or me.
Tell them of Mercy; she is one
Who early hath her pilgrimage begun.
Yea, let young damsels learn of her to prize
The world which is to come, and so be wise;
For little tripping maids may follow God
Along the ways which saintly feet have trod.”
Adapted from JOHN BUNYAN.

Posted by Laura Jensen at 5:14 PM No comments: 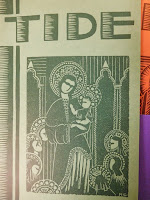 At Facebook at Historic Tacoma December 17. 2019:
Across 21st Street from the Three Bridges Building (posted about recently) is another bit of Tacoma's architectural legacy and an architectural cousin to The Spar Tavern building in Old Town, the RealArt Theater in South Tacoma and the much-discussed Holy Rosary Church. Built in 1914, it too was designed by the architects Charles Lundberg & C. Frank Mahon. Originally a drug store and barbershop, it now houses Coates Chiropractic and other businesses. It still has a barbershop! 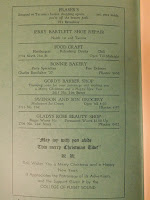 My comment in Historic Tacoma's Comments section included a photo of Tide Literary Magazine from the College of Puget Sound, an advertising section that included Gord Barbershop.  My uncle was a barber at Gord Barbershop.

Another commenter could see The Spar in Old Town in this building.  Another of the issues with the Gord Barbershop advertisement featured a manger scene on the cover, at the holiday season now, it is to share. 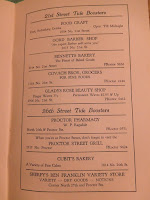 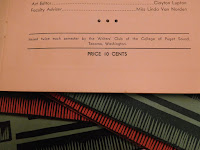 Posted by Laura Jensen at 6:59 PM No comments:

Tuesday  November 30, 1999
Oh, I am weary of skipping my mind through the arbitrary days events to guess how to start off some entry again – all of it feels like I can begin anywhere.
An old 5-year diary with almost no entries is about watching television programs at Grandma’s.  The whole just did not go too far.
In Seattle are marches against the World Trade Organization.
I am steaming sweet potato (diced) in my nice revereware steamer.  (Now this reminds me of some of the letters from Scandinavia.  How the news information is distracted – in the letter – with up to the minute household descriptions.)  I am making Sweet Potato Vinaigrette.  Somehow all the historical domestic recollections are so –

(I also noted down the day elsewhere, and that day I delivered newspapers for an hour and a quarter.  I spent just a quarter of an hour writing the diary entry.  And I worked from two to four at the hourly library worker job I had found at the University of Washington Tacoma Branch. Both jobs started about six months before, I delived newspapers for five and nearly one-half years.)

Posted by Laura Jensen at 5:42 PM No comments:

The Record Album:  Entertainment Drought 1964 And “State Fair”:
A 1995 Review, Love is in the air (mail)
by Michael J. Vaughn, from the Internet
The Anxiety of Influence   by Harold Bloom

A Review
A review of two musicals “she loves me”
And “Most Happy Fella”
Refers to “The entertainment drought
That followed the Kennedy Assassination”.

Influence
In the United States that mourned
It is the swerve of Influence described by
Harold Bloom.    Along a neural pathway
A specific work of art.

Thought turns instead
To a continuum and immediacy
For that national emergency and shock.
Physically I turn off art

I would have experienced.
In State Fair 1962 the family
Reaches Dallas in the convertible.  And thought
Turns instead to the tragedy.

The Record Album
The entertainment drought
Rose from the audience.  State Fair 1962
Was set in Dallas.  On my album cover
From Andrews and Burnett,

After, I almost never listened anymore.

The concert
While the tv stayed on with serious music
News and No commercials in 1963
She came back in the evening from
The Runeberg Lodge Choir fiftieth anniversary.

They presented their concert but cancelled
The Sunday Banquet and the people
From Canada started back.
From the backyard garage and steps

Through the back porch, into the kitchen.
She would have figured out On Friday
if we had wanted to go with her
that Saturday Evening.

The Record Album, Again
I almost never listened anymore.
Orange cover - They have on their
Enormous Sheepskin chaps from Neiman Marcus.
On the internet:  a you tube video of What’s My Line

With Carol Burnett, February 1964.
As she shakes hands with the panel
And she hugs Buddy Hackett,
She continues to look so solemn.

I was confirmed in 1964
In school and In the front pew directly beneath
The national prayer for the bereaved
we continued into spring.   Confirmed, young
And influenced, we were bereaved.
Posted by Laura Jensen at 11:44 AM No comments: 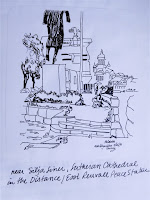 From some translations I made from Swedish Folk Songs - Djupt I Havet. 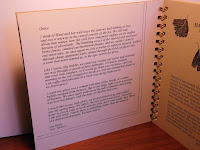 During earliest experiences with computers I still used my manual typewriter.  However at the Arts Commission I entered information for contributors’ bios, I tried for brevity, and entered other necessary material, captions for end-pages photos, during my 1994-1996 grant from the Lila Wallace – Reader’s Digest Foundation.

Dorothy McCuistion and I co-edited and co-designed the compilation and each broadside distributed at the Distinguished Poet Series readings. Dorothy, our Tacoma Arts Commission representative for the reading series project, arranged for the compilation to be included at the United States Library of Congress.

One day I visited the Tacoma Arts Commission to assemble the Distinguished Poet Series broadside compilation. Dorothy McCuistion and I approached stacks of broadsides around a large table. The broadsides remained from those distributed free at the readings, we printed broadsides ahead for remaining readings so these too could be included in the limited edition compilation.

The city scheduled us in a room just off the city council chamber at the Municipal Building, where the table was large enough for our broadsides. We placed the broadsides in an order we felt might best set off the art or meaning of the poem. As we planned, we decided to use my idea that the broadsides should be placed on facing pages. The first poem in the compilation is Grace by Joy Harjo. 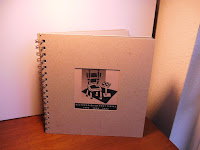 The other day I happened to meet Elaine Briden at the Tacoma Public Library. Elaine participated in the project as an opening reader for Duane Niatum.  The framed Broadsides also appeared in April, 1996, at the Handforth Gallery for National Poetry Month. We reminisced about the reading, twenty-five years ago, in 1994, by Joy Harjo.  And Joy Harjo, this September, gave her first reading as United States Poet Laureate.

Posted by Laura Jensen at 9:52 AM No comments: